Have you ever wondered why you and I feel inclined to purchase some graphics tablets more than others?

Well, the difference is because of the more realistic digital or drawing experience. One such feature that when included in a tablet, makes it climb the ladder is Tilt Support. 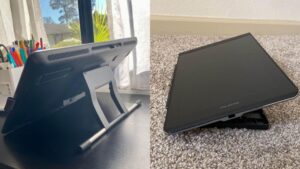 I have always found it challenging to find the right tablet for you in the sea of tablets with varying features and prices. And now, Graphics drawing tablets with tilt response are becoming more and more popular. To assist you in selecting the best tablet, I’ve done the legwork and looked over dozens of options for you all.

And today I want to focus your attention on a characteristic of digital tablets called Tilt Support or Tilt Sensitivity. This enables the device to recognize the angle at which the digital pen is being used on the tablet’s surface.

The gadget software makes use of that data to take appropriate action. Due to the many sketching tools utilized, the final traces tend to resemble actual physical effort. I found this helpful whenever I wanted the brush’s form to change depending on how I held the stylus but you also need pressure sensitivity for another control.

I know it can feel daunting to keep up with the latest advancements, new brands, pricing and offers but Techgeeky is right here to help you through it all with our precise articles!

Why Is Tilt Support Important?

Typically, pressure sensitivity determines the brush size or opacity/flow, but tilt sensitivity is required to determine how the roundness changes in response to wrist motion. I especially found this helpful for calligraphy or line work.

It has to do with how you, as an artist, use a stylus. Tilt won’t likely be a big deal for you if you learn to draw on a computer. You will need to adjust if your pen doesn’t tilt if you learned to draw with a pencil or graphite and are used to angling for delicate shading and smearing. 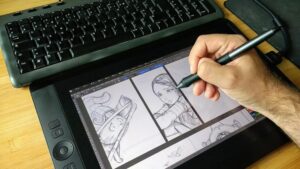 In essence, for those of you who are acclimated to analog media like me, it feels more natural (pencils and charcoal).

The majority of tablets from the most recent generation include the feature of tilt sensitivity. It adds a tool that makes your overall drawing experience easier and more real.

How Does Tilt Support Work?

It might be quite difficult for a device to detect tilt. To provide you with the accurate tilt measurement of the pen, a lot of intricate calculations are performed in the background.

Near the pen tip, the stylus’s copper coil may be seen for the most part. Electromagnetic waves (EM waves) are created when electricity flows through these coils. The tablet is where the actual tilt recognition activity happens.

A network of small wires on the tablet surface is used to detect the EM waves generated by the pen. A tablet recognizes a flawless circular wave pattern with no distortion when the pen is held straight. The waves are thick in the middle and spread out toward the ends because of the nature of EM waves.

The detected wave has a distorted shape when the stylus tilts. On one of the edges, the waves are more concentrated than on the other. This aids the tablet’s ability to determine the tilt’s direction and degree. This wave is less dispersed when the pen is slightly tilted than when it is entirely slanted.

If you tilt your pen all the way left or right while using the same setting, your brush tip will be 50% more horizontally extended. In the below-mentioned video, you can check out the best method to hold a pen for drawing on a tablet.

Pen features can be enabled and disabled:

The appearance of brushstrokes remains unaffected when the pressure, tilt, bearing, and rotation of your pen or stylus are disabled. Instead, the application sets brush properties using predetermined values.

To turn on or off the pen tilt

The majority of the widely used drawing programs and applications enable tilt. The following list includes a few of the most notable I would suggest:

Setting Up Tilt Support In Your Applications Or Tablets

Drag the slider to adjust how much your hand tilt impacts your pen strokes. While making adjustments, launch a test application that supports tilt to check how your modifications affect your strokes.

Setting up in Sketchbook Pro for desktop

When configured, stylus tilt may be found in the Brush Properties section of the Advanced tab and aids in producing strokes with the expected direction.

What does tilt do, then?

It regulates the direction and length of the brush stroke. Use Scaling Percentage and Controlled by stylus tilt to regulate the tilt of your stylus.

Your stylus’s tilt won’t have any impact on your brushstrokes without this set.

While using Apple and Cintiq

Let’s begin by clarifying that the Wacom Cintiq and iPad Pro both allow stylus tilt. If you want your Apple Pencil or Wacom Cintiq Hybrid to be recognized by Sketchbook, hit Preference, then under Pen Connection, choose your stylus.

Any brush can have its tilt scaling adjusted, although only Apple Pencil (on iPad Pro) or Wacom Cintiq Hybrid support it. These styluses have a built-in tilt feature. When sketching, scaling produces the tilt effect. It regulates the brush stamp’s extension. The stamp gets longer as the value increases.

The Tilt Scaling brush attribute isn’t accessible for the other styluses described under Pen Connection because they don’t yet have tilt capabilities.

Finally, The best tilt implementation, in my opinion, is that of Apple. Wacom functions, but it’s less dependable than Apple’s; occasionally, mid-tilt, it loses recognition and records a no-tilt stroke before returning. Additionally, the narrow nibs on Wacom pens make it slightly more challenging than on the Apple Pencil to combine tilt and pressure.

Since you’re reading this article, you must have had the experience of browsing or owning graphics tablets. And for everyone who has, we always come across these specifications like pressure sensitivity.

And now that I’ve mentioned Tilt Support, which should you look for and why?

You can adjust the application to match your stroke strength by specifying pen settings. Each person uses a different amount of strength or pressure when making a stroke. If you have a light touch, proper pen settings are especially helpful.

For some instruments, changing the pen’s settings can boost sensitivity if a light stroke leaves no trace. Brushstroke width changes that occur suddenly indicate that you need to update your pen settings on the Pen Settings tab of the Options dialogue box. Pen settings are storable.

For certain brushes, typically those with irregular shapes rather than a circle trace, tilt support is used. The shape and angle of the stroke will vary based on how you tilt the pen. It is fantastic for specific details and adjusting line weights but isn’t necessary for the sense that it’s a valuable tool for drawings.

It isn’t necessary, but it might help the process feel more natural (tilting a pencil, for instance, shows broader or sharper strokes). This is typically handled through pressure sensitivity, although it is still a good feature to have.

What Is A Tilt Support Stylus? 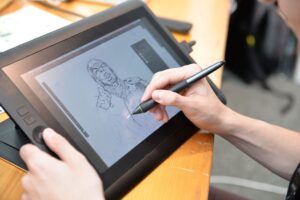 When the stylus is tilted at an angle, tilt sensitivity in styluses enables artists to shade just like a real pencil. For artists like me who do a lot of shading work, this may be crucial.

The angle of your stylus will influence the thickness of your line, just as with a decent graphite artist pencil. This is important for shading, cross-hatching, intricacy, and definitely drawing.

I would suggest the following as the best styluses that have tilt support:

I would list them in the following order of my preference:

Being first on my list, the Wacom Cintiq 16 is a 15.6-inch tablet with a full HD screen that supports ±60° of tilt recognition.

This one is a mid-range tablet with ±60° tilt support and a full HD display.

Similar to Cintiq, it is not a stand-alone tablet. This means you have to keep it connected to your computer via USB or HDMI to Mac adapter cable that comes in its box.

Like the Cintiq and XP, this one gives you a ±60° tilt support as well. Huion tablets are probably the most sought-after brand after Wacom in the drawing tablet industry.

This pen registers up to 60 degrees of tilt recognition.

With new capabilities including tilt functionality and a battery-free stylus, the Huion H610 Pro V2 improves upon its predecessor.

Gaomon is a brand that is less well-known, still, it puts several excellent capabilities into this inexpensive graphic drawing tablet and competes with the others in the list by providing the same tilt support. 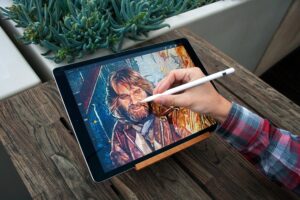 In my opinion, anyone can learn to tilt their workspace, and it may then be used as an additional modifier when drawing.

For example, if I want tilt to change size instead of opacity and pressure to change opacity instead of size. This is similar to how a traditional pencil operates. A pencil line just gets darker as you press down harder; it doesn’t get bigger. The line does get larger when you tilt the pencil, though.

When I use programs like Corel Painter, the brush hairs may be replicated, and the shape of the digital brush changes with an angle just like a real paintbrush, which can create dense lines when tilted or tiny ones when softly brushed. This makes tilt beneficial for people who enjoy digital painting.

I’m not sure if the price difference is justified. Furthermore, it depends on the programs you employ. Are you “needing” a tilt?

Not necessarily. You could get by without it. However, picture a pencil. A pencil that allows for writing on both the tip and the edge when held horizontally. typically for shade and other purposes. That provides you and me with more creative freedom and can be advantageous.

The same is true for rotation. Would you like it? Possibly not but if you rotate a paintbrush, the stroke can be significantly altered. I found that I didn’t need tilt or rotation if all of my work merely required the point of a pen or pencil.

Perhaps one requires those functionalities if you believe you’ll use the tools to the fullest extent possible. It’s up to your needs and usability, at last, I stated mine.