Ever wondered why there are insane varieties of Styluses available? What makes one stylus better than the other? Digital pens have been subjected to technological advancements ever since their discovery. Among various companies and their war on creating the most powerful, all-in-one stylus, it stands out to me with its patented EMR technology from wacom.

Here I will list various reasons why it’s my preferred stylus. EMR delivered to me a digital handwriting experience that felt as natural and intuitive as pen on paper.

Before we dive deeper, it’s important to know why it’s important to invest in a good stylus and how EMR (Electro-Magnetic Resonance) Stylus stands out the most. But if you don’t want to read then you can watch this video as well.

Let me explain why stylus pens are the need of the hour? Market growth has one major factor that leads to its technological advancement and increasing digitization across various sectors. As an example, in the education sector, digitization has brought about the age of smart classrooms and interactive whiteboards (IWB), both of which require stylus pens as a mode of communication between the faculty and the students.

The demand for stylus pens is increasing as online teaching and training methods have gained more popularity. It has become a more common method of imparting education than traditional teaching methods. Over the forecast period, the growing use of digital pens in the development of digital artwork is expected to boost demand for these pens in education and related industries all around the world.

Among various advancements in the Stylus market, EMR-powered digital pens have captured the market and successfully stood upon the buyers’ demands. EMR technology can be seen in stylus from various major brands such as Microsoft, Dell, Wacom, Samsung, etc.

The major selling point that I found while using EMR-based digital pens is the fact that they work without being battery-operated. This adds to their ease of access. However, where does the EMR stylus get the power needed to operate from?

In this article, I have put forward the science that makes EMR Stylus the most preferred digital pen on the market. Read on to find out.

How Do Wacom Pens Work – Overview

EMR or Electro-Magnetic Resonance is equivalent to saying that the stylus gets its power from the tablet itself. Wacom’s patented EMR technology consists of a layer of sensors that exist behind the Liquid Crystal Display (LCD) of the device. These sensors exist in an alternating pattern. Each sensor emits a weak electromagnetic signal.

However, in unison, this network of sensors presents a magnetic field that is strong enough to extend about 5mm beyond the glass screen of the tablet/device. The horizontal and vertical intersecting grid formed by the wires inside the tablet form an electromagnetic field. 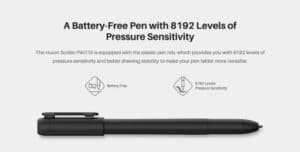 The electrical energy thus obtained helps in recording the intensities such as tilt, pressure, and other specific pieces of information. This data is generated and quickly sent back to the wire coils and it gets converted into waves.

These waves are then understood by the tablet and the user gets the desired outcome in terms of thickness, tilt, texture, etc.

The Technology Behind EMR Based Stylus:-

The various techniques used by EMR Stylus are conversion, wireless transfer, and detection of electromagnetic waves.

It is because of these technologies that these EMR Styluses have no risk of batteries dying out or wires breaking due to twists and turns. And this is my absolute favorite part while working with these.

The work of the surface of the tablet here is to sense and receive the Electromagnetic waves.

A stylus is liable for analyzing and accepting the pressure data and sending it back to the tablet for further information.

EMR Stylus is not battery operated and hence doesn’t require charging. I found these very easy to use because of this feature. It adds to their ease of access as they can be carried anywhere without the hassle of carrying a charger or looking for a charging source.

The main motive behind me writing this article is because I want to spread the word about these amazing and affordable stylus pens available easily on the market. EMR Stylus is so inexpensive that I can easily replace them in case mine gets lost/stolen.

Battery-operated pens are more prone to damage. The battery contains various chemicals and is home to constant chemical reactions. Thus this battery keeps degrading over time which degrades over time and in turn, negatively affects the usability of the pens.

This gives EMR Stylus an edge over the other options on my list.

The electromagnetic resonance technology gives an overall better performance due to an enormous number of data points and fast communication. For drawing purposes, a tablet that supports a stylus is best to work upon. The output produced on my work is pretty consistent and smooth. I found the pressure curve to be accurate at the lowest levels as well. This gave a near-perfect reading of the input instructions and an exact output.

Thus EMR proves to be an amazing, inexpensive stylus that provides all the essential features people like you and me are looking for while using digital media as a medium of communication.