The stylus has become increasingly popular in recent years as a result of the rise in tablets and smartphones. Who doesn’t know a stylus now? I believe nobody. People stay glued to their phones for many purposes, even necessities. Services like transport, travel booking, food, groceries, knowledge, entertainment, and whatnot. However, when precision is needed in digital designing or art purposes, a stylus comes to the rescue.

But, have you wondered about how exactly a stylus can replace the touch of a finger? If so, this is what I am writing this article about.

How does a stylus help us?

Technically speaking, a capacitive stylus is a tool that works as an extension of our fingers and therefore helps us in interacting with touch screen tablets.

The stylus not only gives better control over the movements of the pen but also allows you to click smaller areas with absolute precision. This enables you to draw and write incredibly better when compared to what our blobby fingers could produce. Other than the stylus there are many other devices that can be beneficial for drawing tablet users.

And how exactly does this magic happen? That a capacitive stylus is able to substitute the primary medium, finger, on a touchscreen?

Well, this is strictly our topic of discussion in this article. For this, we shall dig deep and understand the working of digital stylus and also touchscreen technology. We shall then figure out how they work together in sync to accept touch input from the user and give the desired outputs.

Are there different types of stylus pens?

There are two different types of stylus pens; the active stylus and the passive stylus. 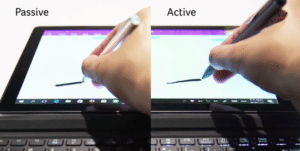 Just like a pen, an active stylus consists of a tip. However, it consists of internal electronic parts. An active stylus provides more accuracy and has pressure sensitivity, which makes it a go-to choice amongst artists and designers.

Periodically, an active stylus will have added features, such as memory or an eraser mode. There is also an EMR stylus on the market as well. For example Apple pencil and Samsung S Pen.

A passive stylus also comprehended as a capacitive stylus, allows the user to write and tap directly on a screen. However, it does not convey inputs directly through the stylus to the device.

When compared to the active stylus, its working is quite simple. The passive stylus just conducts the electrical charge from your finger to the touch screen.

A pro of the passive stylus would be the fact that these work on all touch screens. Whether it be Android or iOS, one doesn’t need to invest in purchasing different stylus pens for different operating systems.

Further in this article, I will compare the working of both, active and capacitive stylus now that their difference is clear.

The mechanism behind the working of a capacitive stylus

A requisite for its functioning is that the tip should be wide enough to generate enough capacitance for the screen to register. This is the reason why styluses cannot have way too thin tips for more precision.

So the basic functioning of Capacitive styluses is that they work by transferring electric charges from your body to the tip of the stylus where it interacts with the electric field of the touch screen and therefore generates a touch response.

Let us first have a glance at knowing how a capacitive touchscreen works. Then we can easily understand the science behind capacitive styluses.

Components and their arrangement in a touchscreen are two:

A capacitive touchscreen is completed by laying down two layers of horizontal and vertical wires that run across the screen. These two layers are separated by putting a transparent insulator in between.

The aforementioned wires are made of Indium tin oxide, which is a transparent material. Indium tin oxide conducts electricity and does not affect the visibility of the screen underneath, making it the most feasible material option here.

Understanding the mechanism inside

Constant electric current is provided to the rows of wires at the bottom layer. Due to this, they are also known as “driving lines“.

The “sensing lines“ or top layer of wires are responsible for detecting the electric current, thus the name.

As both the layers of wires are separated by a transparent insulator in between, the electric charges running through the bottom layer cannot jump to the top layer. The electrons accumulate on the bottom layer thus producing a negative electric field. This results in the accumulation of positive charges on the upper layer of wires. This setting is what is called a capacitor, and this is where it gets its name– capacitive screen.

How is the touch input detected?

Traditionally when a finger is used on a touchscreen, our bodies being a good conductor of electricity, interacts and disrupts the electric field. It causes a change in the number of positive charges on the upper layer.

This change in the positive charge changes the capacitance of that area on the screen. Change in capacitance is measured and located on the grid by the sensors installed around the edges of the grid. The produced change is noted and reported as a touch input.

Working with a capacitive stylus vs fingers

The working of a capacitive stylus is similar to that of our finger. Both cause the same effect. Being a conductive object, it disturbs the electric field on the touch screen and the touch screen registers it as a touch input. The tip of the stylus is made of conductive rubber material which allows the charges from the stylus to reach the screen. That being said, you can’t touch the screen with any random object and expect it to work as a stylus would.

For an object to work like a stylus, it should qualify the following criteria.

Simple capacitive styluses mostly available in the market have a metallic body that connects to the conducting tip of the stylus. When the stylus is held, the electric charges from your body get transferred to the stylus, which in turn interacts with the electric field on the touch screen to generate touch input.

What makes these capacitive styluses more popular is that they have no electronic parts or batteries inside which makes them easier to manufacture and come at a cheap price. That being said, some capacitive styluses are available in the market that are battery-powered. The battery is used to provide the electric charge that would otherwise come from our body. This allows them to work when wearing thick rubber or woolen gloves as well.

The mechanism behind working of an Active stylus

An active stylus is one that works with a digitizer screen. A digitizer is a special sensor built into the touch screen that actively senses the presence of a compatible stylus and takes inputs accordingly.

This digitizer technology allows for using additional features that are not possible when using capacitive styluses. Like when the stylus hovers on the touch-screen, a cursor appears, and when the cursor is located over a file, you can click on the stylus side button to get a contextual menu available. Likewise in some styluses, you can flip it around and the tablet would automatically switch to erasing mode and you can use the eraser tool.

Active is also called Digital styluses for their ability to work with digitizer screens. These include digital components or circuits inside the pen that communicate with a digitizer on the touch device. This communication further allows for advanced features like pressure sensitivity, tilt, programmable buttons, palm detection, eraser tips, memorizing settings as well as writing data transmission. For an active stylus to function to its maximum potential, its digital component protocol must match the digitizer technology inside the touch screen it is interacting with. Active styluses get their power from a removable or chargeable battery or can operate passively by the method of inductance.

Active styluses might use different protocols by different manufacturers in order to communicate with the digitizer of a graphic tablet or multi-touch device. An important point here is that the digital protocol of the pen must match the device digitizer, otherwise, input from the pen will not register on the device.

Active pens may feel a bit heavy, this is because of the inbuilt elements. Although a slightly heavy pen does have its own advantages, like providing a sturdy feel and permitting long periods of use. The tips are usually fine and pointed ones, with which you can draw fine lines and curves with precision. However, there are some compromises. Active stylus pens cannot be used for a longer time as they run on batteries. These batteries usually run out of power after a few hours of use. Some exceptions provide an extended and good battery life as well.

Active pens also lack the feature of universal compatibility. Most of them are exclusive to a particular platform or software. This limits its ease of access.

Some of the best active pens available widely as of now are the Apple Pencil, Wacom styluses, Samsung S-Pen, etc.

Passive pens on the other hand are excellent for casual surfing and swiping, or even writing down notes in times of need. But one shouldn’t rely on those for any meticulous writing/sketching purposes.

Rightly so, Passive pens are also called the extension of the human finger. I would give the example of the Meko Universal stylus and the Lynktec Stylus are some of the best passive stylus available right now.

An active stylus pen requires an active connection like Bluetooth to operate, whereas a passive stylus doesn’t require any such complexities. The option of universal compatibility in a passive stylus enables it to be used with any device with a capacitive touch screen. Whereas the compatibility of the Active pens is limited. Another great point of distinction is the accuracy of the strokes registered. Active devices provide a more precise stroke than a passive pen, as a result of their battery-operated active connection.

I can conclude that because of its working mechanism, Active Stylus pens are most suited for professionals and enthusiasts who want to get the most out of their writing and sketching endeavors in their professional works. As long as these have an active connection with the host device, you are good to go.

Bluetooth is the preferred mode of pairing for most pens, but some use a wired connection as well. Since they have inbuilt power solutions and an active connection with the host devices, they also have much better accuracy and precision than a passive pen. This is why knowing how a stylus pen works is important in letting you choose better which stylus should be your choice.