As someone who owns a Samsung tablet, you have a device that provides you access to a lot of great applications.

However, if you just got a new tablet and have no prior experience with it, then figuring out how to download and manage applications might take a while.

The purpose of this article is to provide you with the basics that every Samsung tablet user ought to know as far as applications go. 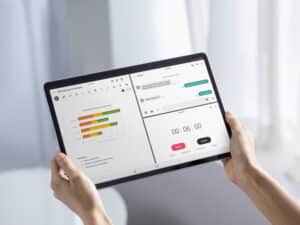 For starters, let’s take a look at how to download apps on Samsung tablet.

Besides the Install button, you will also need to click on the Accept button to confirm that you want to get the app on your device.

As a new tablet owner, you might go a bit overboard and download too many applications without realizing it.

To delete an application manually, tap your finger on an app icon and hold it while pressing for a while. Almost instantly, the icon will start to wiggle, and you will see a small window above the icon giving you three options:

All three are pretty self-explanatory. After you tap on Uninstall, you will be prompted to confirm whether you want to remove the application. Confirm it and wait for the app to get deleted. It should not take too long.

Should All Apps Run on My Tablet?

Long story short, every application you download from the App Store should be compatible with your tablet.

After all, applications are put on the App Store precisely because they are compatible with the operating system.

So, virtually every application you download should launch on your Samsung tablet. The performance is another question because not all app developers put in enough effort to properly optimize their apps for different devices.

In other words, if an app launches but there are significant performance issues, the fault is not with your tablet but rather the application itself.

What Causes Apps Not to Launch?

In some instances, an application might not launch even though it should. There are quite a few reasons why that happens.

Similar to other devices, Samsung tablets also have the cache and other temporary storage. Too much clutter causes performance issues, and you want to get rid of the cache on a regular basis to solve various problems, including apps not launching.

Check if your tablet is up to date. Open Settings, go to the Software Update tab, and if you see a notification about a new available update, install it as soon as you can.

Besides the OS updates, the app itself could be missing an update, which you can check on the App Store.

If an app crashes or fails to launch properly, try deleting and reinstalling it. A small problem might have snowballed enough that it now requires you to get an application from scratch so that it can run optimally.