You have bought an iPad that doesn’t have a headphone jack or thinking of purchasing an iPad with the foremost priority of having a headphone jack. If this is the case, then you are at the right place because today, I’m going to tell you all about iPads and their headphone jacks.

I’ll be honest with you, Apple fans out there, don’t take it too harshly, but Apple has been known for taking away the basic features and privileges from its buyers for the last couple of years. From removing the charger brick from the latest iPhone bundles to removing headphone jacks from the iPads.

This unicorn giant is very radical and unforgiving in the way it phases out its product features that they consider as “outdated” or for an “environmental” cause, which is, in my opinion, ironic. The iPad lineup got the first taste of missing headphone jacks from the iPad Pro 3rd generation models, which were released after October 2018. The absence of headphone jacks was also evident in the later iPad Air and Mini variants. So how do you get a workaround for the missing iPad headphone jacks at this point?

Let me tell you there is nothing to worry about in this situation. I have got it all covered for you. Now here comes your USB-C port to the rescue, for which you will need to purchase a dongle that will work as an intermediate for the wired headphones and the USB-C port.

Are Headphone Jacks Included In The iPad?

So let me address your main question: Does the iPad have a headphone jack?

Only the iPad 9th gen doesn’t have a USB-C port for charging, while all the other models come with that feature. If you go on Amazon, it will show you a plethora of dongles and adaptors for various devices. Look for one with a 3.5mm headphone jack adapter if you want to use it with the iPad headphone jack.

This year too, only the predecessor of the iPad 9th gen, i.e.,iPad 8th gen) was the only model with a headphone jack. But I have good news for other iPad 2020 owners. You guys who want to use wired headphones with other iPad 2020 models can get an iPad-compatible USB-C to 3.5mm adapter from online marketplaces like Amazon.

I want to share a fascinating fact that Apple skipped the release of a new iPad Pro model in 2019. The iPads from 2019 were the iPad 7th gen, iPad Air 3rd gen, and the iPad Mini 5th gen. Back then, all these iPads came with a headphone jack to directly plug in your headphones and enjoy an immersive sound experience.

The iPad lineup of this mentioned year includes the iPad Pro (12.9″) 3rd gen, iPad Pro (11″) 1st gen, and regular iPad 6th gen. Like every year, the standard iPad 6th gen had the headphone jack integrated into it. 2018 saw the deletion of 3.5mm headphone jacks from both iPad Pro models.

For a reminder, the Pro models released in 2018 without the headphone jack, a USB-C to 3.5 mm adapter is all you need to connect the wired headphones.

Some of you will be relieved to hear that almost all iPads released in 2017 or earlier have a headphone jack. You don’t have to spend hours on the internet trying to select adapters from different third-party brands if you own any of these older models.

These earlier iPads didn’t come with a USB-C port but a Lightning charging port for their power supply and a 3.5mm headphone jack for connecting wired headphones.

Now, I’ll address some interesting feature changes that the entire lineup of iPad has gone through. 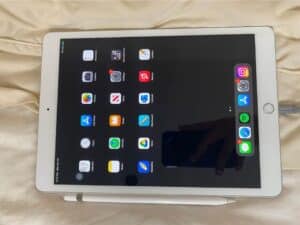 Depending on the iPad, headphone jacks can be found either at the top or bottom, alongside the speaker grills. Apple’s method of positioning headphone jacks on its tablet needs to be more uniform.

Why Are Headphone Jacks Being Phased Out?

One of the main reasons Apple is slowly phasing out headphone jacks is to make their tablets slimmer and lighter. Also, dumping the headphone jack makes their devices more resistant to water damage. While these reasons sound very legit, they are doing this to sell more of their wireless audio accessories.

So, by now, you have abundant knowledge about iPad’s headphone jacks, and directly I will address some of the questions that some of you might still have in your mind.

Yeah, I know it can get confusing sometimes, but most iPads released before 2019, except for the Pros, will have headphone jacks. So, it depends on the particular model and the year of the iPad you are getting if that will have the headphone jack or not. Although in 2020-21, Apple released some new iPads that ditched the 3.5mm headphone jack for a USB-C port which I have mentioned above.

Still, if you have an iPad with no 3.5mm headphone jack, you can either use a USB-C to 3.5mm adapter to connect your headphones or a wireless headphone that will connect to your iPad via Bluetooth.

You can also connect wireless headphones via Bluetooth if you prefer. So, enjoy listening to music and watching videos with a more inclusive ambiance using headphones on your iPad. If you still have doubts, you can revisit this article anytime or drop your questions below.