When shopping for a drawing tablet, it pays off to make sure you know what you need in the tablet that you are going to use. Huion KAMVAS GT-191 is one of them, how much resolution is perfect for you or how big of a screen is suitable for you, do you need extra features like WiFi? Also one of the most important parts is how much do you have to spend? 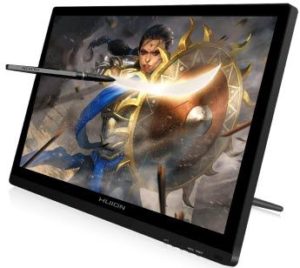 There are lots of tablets out there jostling for your attention, and it’s worth taking the time to make sure you get the right one that suits your needs and preferences. Even when you factor in all your preferences, there will likely be multiple options left.

The Huion Kamvas GT-191 is built mainly out of black plastic, with a glossy glass surface that covers both the display and the bezel. Looking at the bezel it seemed fairly chunky to me, adding a bit of size to the already large pen display, but it isn’t odd or weird for a device in this segment. 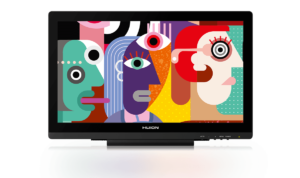 When holding the device for the first time I felt that the build quality is excellent, making the GT-191 feels like a very sturdy device. It is a little heavy to hold during use and includes a high-quality metal stand.

The front of the device looks like a regular monitor, as this pen display has no shortcut buttons on its screen that other standalone tablets and pen displays provide. The only buttons present physically on the device are located on the lower right edge like the power button, and other buttons that help you navigate the various display options like brightness and contrast.

Overall, in my perspective the Kamvas GT-191 both looks and feels like a premium product despite its mid-range price tag.

I found the setup process to be painless and I was able to get the tablet working with the drivers which I downloaded online. I wouldn’t recommend installing the drivers from the CD as they tend to be pretty dated and will need an update anyhow. 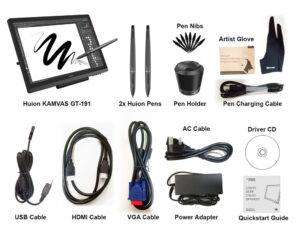 The setup consisted of removing the drivers of my previous drawing tablet that I had installed on my PC and then installing the GT-191 drivers, then connecting the device to my PC via USB and HDMI for the video connection. My Windows 10 computer detected the device as an additional monitor instantly.

The GT-191 unlike other pen displays doesn’t keep things simple. I had to use the USB port for data and the HDMI port for video connectivity on the GT-191. I also noticed a DVI port and a VGA port. These are all located in a single convenient location, along with the power port, so cable management is easy. 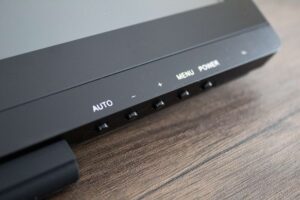 However I faced a problem, that is, when using the tablet with the included stand, I ran into an issue with cable management and routing. The issue was that the ports are all located on the bottom of the monitor, or the edge that’s facing me when was using it, I routed them through the holes in the stand but it was still impossible to lower the stand into a completely flat position due to interference from the cables.

The tablet features a big 19.5 inch IPS display with a Full HD 1920 x 1080 resolution and viewing angles that I found were really great. The stand allowed me to adjust the angle of the display whenever I needed between 20 degrees to 80 degrees. The colors remain fairly constant due to the IPS display. While the stand is very usable, a pen display of this size is much easier to handle when I mount it on a flexible monitor arm. 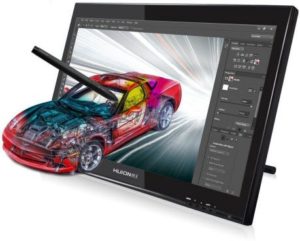 While touching the screen, it had a glossy finish and it was made entirely made up of glass. There is a pre-applied screen protector applied from the factory. The screen protector cuts down on glare, but it also introduces an unpleasant rainbow effect when I was drawing on the display.

When drawing I was faced with parallax, which refers to the visible distance between the glass the pen rests on and the actual display beneath, but it was very minimal and I got used to it after prolonged usage.

The performance I felt on this tablet was great. It features 8,192 levels of pressure sensitivity, which I definitely did notice as used to a less sensitive device. The initial actuation force is a bit higher than the premium Wacom Cintiq tablets, but I didn’t find that to be that much of an issue during my usage. Overall. It performs far above and beyond what I expected in this segment. 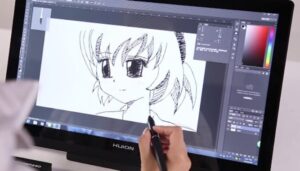 But there was one performance issue that I ran into but was fixed very easily. The screen protector is meant to provide a rough, paper-like texture but it is too rough for use. Drawing on the screen protector didn’t feel very good and sometimes the pen would catch and drag. Removing the screen protector fixed that issue, and the glass screen is unlikely to be damaged by the pen nib anyway.

After I stepped up from the pen display with a smaller screen size to the GT-191, my ease of work has been altered for the better. There is a ton of screen space due to the large display size and high resolution, leaving plenty of space for all the user interface elements of my drawing and creative program.

The only real usability issues that I found were fairly minor. The tablet doesn’t have any function keys which are odd for a pen display with such high build quality. It meant that instead of conveniently placed shortcut buttons, I had to keep my keyboard handy. Another issue I faced was the cable placement and routing.

The Huion Kamvas GT-191 does a good job of delivering premium build quality and performs very well at a fraction of the price compared to the Cintiq. Though I felt the lack of shortcut buttons, which I felt was the only issue of the tablet.

I would recommend this pen tablet to everyone who is looking to upgrade from a basic drawing tablet, or a smaller pen display from a lower segment then it is absolutely worth a look. It is also worth a look if you don’t mind using the keyboard for shortcuts.