Are you planning to get an iPad but are confused between the Pro and the non-pro models? If the answer is yes, you are looking at the right article. But which one would be the right choice for you? I will address all the details that will help you decide between these two lineups of the Apple iPad series.

I’m amazed at how iPads have gotten powerful with time, and you can do a lot more on iPads compared to an iPad released a few years ago. With the inclusion of the M1 chipsets in the iPads, I recommend you easily replace your laptop with one of these fantastic devices.

So to learn all about them, read further where I have written a complete comparison of the iPad and the iPad Pro for you guys. So without any further delays, let’s get right into the details. 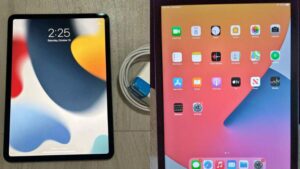 Differences Between The iPad And The iPad Pro

Now I’m going to give you guys an idea of what spectrums the iPad and iPad Pro are different. Let’s start with the difference in the design language of the two iPads.

Different people prefer other parameters, and I’m going to test each parameter in-depth, so every one of you has a clear idea of those specs.

Apple takes pride and joy in its iPad lineup, and the design reflects those emotions. Even when you take the tablet out of the box, it is stunning both in looks and feels, but when I kept the 2021 iPad is kept beside the Pro model, things got a bit awkward as the iPad non-Pro comes with thicker bezels than the Pro models which don’t match in my opinion.

The standard iPad also has rounded edges and a Home button, a rapidly disappearing element of Apple’s design philosophy.

One feature of the iPad Pro that captured my heart is the ability to attach the Apple Pencil 2 magnetically on its side and charge wirelessly while connected. The inclusion of this feature by Apple is a great way to keep your Apple Pencil handy and ensures that you never lose your Apple Pencil.

Now coming to the screen dimensions of the iPads, the iPad boasts a 10.2-inch Retina IPS LCD panel with a resolution of 1620 x 2160 pixels, while on the other hand, we have the iPad Pro 12.9 inch model for video editing that has a Liquid Retina mini-LED display with a resolution of 2048 x 2732 pixels.

If you go with the 11-inch version of the iPad Pro model, you will get a Liquid Retina IPS LCD with a 1668 x 2388 pixels resolution. The only downside with the non-pro iPad model is that it lacks the 120HZ refresh rate and the HDR10 capabilities of the iPad Pro series.

The iPad Pro display is a better competitor in my daily usage, although the iPad is a no-slouch. If you like traveling a lot and use the iPad outdoors, you should consider the 11-inch version of the iPad Pro and if the size doesn’t matter to you, go for the 12.9-inch one.

This is the part things turn around. The iPad and iPad Pro are equipped with glass fronts, aluminum backs, and aluminum frames, so they have the same build quality. Despite this, due to the size of the iPad Pro and the extra hardware, the weight climbs to 1.5 pounds, which is rather heavy for a tablet.

As for the importance of the iPad, it falls into the same category as its peers at 1.07 lbs. Overall, the iPad is easier to carry around when traveling outdoors. The winner of this round is the iPad.

Those looking for a basic yet competent tablet can find the iPad a perfect choice. Aside from playing games, watching movies, surfing the internet, and listening to music, there are other things you can do. With the Apple iPad, I could handle everyday tasks easily, thanks to the A13 Bionic chip.

Regarding performance, the iPad is an excellent value because it completely dominates its rivals. In contrast, the iPad Pro is geared more toward creative professionals, as it’s equipped with Apple’s M1 chipset, which first appeared on the Macbook Air in 2020 and blew the computing world away.

Moreover, it contains the finest memory specs and hardware Apple has ever been able to create. The iPad Pro has no competitors in the market with this kind of chipset. For me, the iPad Pro takes this round.

In my daily usage and tests, it is proven that the 10.2 iPad 2021 offered me over 12 hours of battery life on a single charge. You can expect this number to be impacted by excessive gaming or watching movies back-to-back, but I have conducted a good benchmark.

However, I was grateful for a larger battery on the 12.9-inch iPad Pro that compensates for its power-hungry display and powerful chipset. You can expect about 10.5-20.5 hours of use from one charge.

Come on; accessories are a must if you are purchasing a tablet. Using a tablet is much more enjoyable with cases, keyboards, styluses, and other peripherals, so let’s see how the iPad and iPad Pro compete against each other.

On the other hand, you are limited to a Smart Keyboard for your iPad, as it lacks a Smart Connector.

As I have already mentioned, the A13 bionic chip is inside the Apple iPad, the same chip used in the iPhone 11. This chipset is excellent when performing daily tasks, and it didn’t lag while I was operating the tablet, but when it came to heavy gaming or editing huge video files, it showed signs of getting a bit slow once in a while.

The iPad Pro handles everything easily, including rich editing apps and graphics-heavy games. This is all due to its M1 chipset, which is very powerful, and it won’t give you any problems for the next 4-5 years to come. 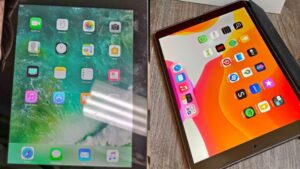 Both the iPad and the iPad Pro can be upgraded to iPadOS 16, and believe me, they will receive updates for many years ahead, so you are looking at a similar experience from both of these devices on the software end. I did not find any differences in my daily usage in their UIs, and they felt identical to me.

But when speaking of their speed in opening apps and stuff, the iPad Pro felt a lot faster to me, and working on heavy editing apps; the iPad felt a tad slower. Also, thanks to the Apple Pencil 2, iPad Pro’s drawing experience is superior to using Apple Pencil 1 to draw on the iPad. Well, guess what? iPad Pro wins in this department too.

On the iPad Pro, we have the triple camera setup at the rear, and the specialty of one of these cameras is that it is a LiDAR sensor. You may ask, what is LiDAR? LiDAR (Light detection and ranging) technology enables the iPad Pro to use lasers to scan the scene’s depth, which helps take better photographs and provides you with a superior AR (augmented reality) experience.

We can see this technology in their recent lineup of phones, i.e., the 12 Pro, 13 Pro, and the 14 Pro iPhones, which means Apple is slowly rooting toward the AR path.

On the front of both the iPad and the iPad Pro, you get a 12MP camera, so there isn’t a significant difference in the quality of selfies, and both perform equally during video calls. As for stock photography, the 12MP paired with a 10MP ultrawide camera setup clicks pictures with astonishing details in daylight, which I have tested in my daily life.

In recent years, the camera quality of iPads has been improved in comparison to those released before. Apple saw the need to equip the iPad Pros with cameras as good as iPhones due to the rise of people who shoot videos for social media and other projects. Just the fact that the iPad Pro still doesn’t have the support to shoot night-mode photographs.

Although, you can plug 4K videos at 60 fps (frames per second) and 240p slow-motion footage at full HD resolution with the iPad Pro. On the other hand, the iPad lacks very far behind with the capability to only record full HD or 1080p videos at 30 fps. In terms of videography, I suggest you go for the iPad Pro.

You can also check out the difference between the iPad Pro and the Laptop in our other article.

Finally, we come down to what matters the most: The Price. There is a whopping difference of approximately $700 between the iPad and iPad Pro prices.

The Pro model is on the expensive side of the spectrum with a price tag of $1000, while the non-Pro iPad will cost you somewhere in the $300, provided that you find a good deal. It’s up to you whether you want to save money by going with the iPad or go all out by going with the iPad Pro with all the bells and whistles.

Now that I have completed the comparison between the two, you guys must have figured out which one to buy based on your budget and preferences. But some of you guys still have some questions regarding their differences. So, I’m going to address those questions below.

A fully loaded iPad Pro is powerful enough to replace your laptop if you can find all the necessary apps. Besides offering excellent battery life, this device is a great option for students as the main computer. It is also a perfect option for creative professionals who want to avoid carrying a heavy laptop.

Apple’s M1 chipset makes it possible to use an iPad Pro for many years, so if you buy it today, you will be able to use it for many years. Due to the impressive memory specifications, we cannot see a scenario where users will require more than 16GB of RAM in the next five years. 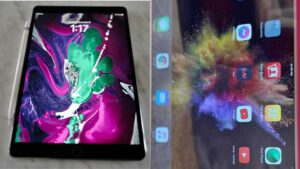 My comparison between the iPad and the iPad Pro has cleared your confusion, and now you are ready to choose the one that fits perfectly for your daily usage.

You can also check out the best alternatives for iPad here.

If you have any more questions, please write those in the comments. Thank you. Have a nice day.